MOJ: THE LADY LAWYER WHOSE HEART IS IN MUSIC

One late evening, sometime in 2013 – still in my first year at the university – a friend of mine asked me to accompany him for a certain group meeting at the Sports Complex. The Sports Complex of Obafemi Awolowo University, Ile-Ife, primarily house all indoor and outdoor sporting activities. But, this beautiful arena is also a mecca of various social activities besides sports. Informally, students use it as a venue for meeting, tutorial, fellowship and rehearsal. Hardly a day goes by that you would not see students especially in groups gather in performing one activity or the other. I was still new to the road geographical network of the school, nevertheless, we took what appeared to be a short route to our destination. We passed through the blocks at Fajuyi (Faj) Hall and burst out in front of Akintola Hall and then walked for two minutes or thereabouts to the Sports Complex. 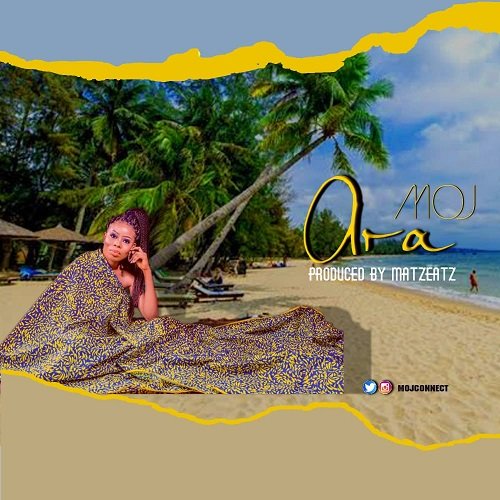 Unsure of the exact location the meeting was holding, we kept walking with our eyes intentionally browsing through any group of students, like eaglets in search of their mother. We had just passed the IAAD-compliant swimming pool, when a voice rent the air that put us on a standstill pedestal of bewilderment. While in this position, the sweetness as of fresh and cool morning breeze suddenly blew us. The evening and the place where we stood was like a morning in heaven and the voice we heard singing sonorously wasn’t much different from that of an angel.

We waited for another three minutes or so for the song to end. Now, we had a clearer view of who was singing. It was one slim lady with fairer skin, dark hair and descent height. She wore a black skirts upon white blouse with a black matching pair of shoes. Being a law student myself, it never occurred to me she was my course-mate until my friend pointed out that to me. “Obans, that lady is a law student”, he said amusedly. “How do you know….so you mean anybody in white and black is a law student?” I inquired. White and black is regulation dress for law students and it is hard to hide your identity if you are a law student. Somehow we all agreed not to argue about it. None of us was sure. My friend was an English Student and we were all in our first year, though we offered two English courses together.

After that incident, I started seeing the young singer more often at the Law Faculty. Truly, she turned out to me my course mate! We never talked or had any conversation until some weeks later while waiting for a lecture. We had an extensive discussion and soon turned friends. Since then, I have observed with amusement how she was able to perfectly combine her academic and music. She happens to be one of the few exceptionally brilliant ladies I have come to know.

Being a natural entertainer and possessing a carriage that disinters spirituality and essence, Mary Oluwaseyi or “MOJ”, as fondly called by her fans, is a humble, teachable, engaging and lively personality. She exhumes confidence and some kind of assurance as the biblical King David or Queen Esther would, knowing that they had divine Covenant with God.

MOJ was born in Ibadan in Oyo State, Nigeria, into a family of five, of which she is the fourth child. At age nine, her talent in music found expression when she composed her first song and started performing at Sunday Schools and other children-related events. However, she got fully convinced about her passion in music and as a career path in 2012, the same year she was offered admission into university.

Although, growing up was not too exciting for the young artiste as she had to confront challenges and setbacks which life posed to her. These have also helped in shaping her and making her more determined and resolute in the pursuit of her dreams. Said she: “I’m thankful. I’m adapting to changes, surmounting my challenges and of course, growing tough”.

ALSO READ: MY VISION IS TO CREATE AN ATMOSPHERE OF WORSHIP, GOSPEL ARTISTE LARRY SPEAKS

MOJ gained admission into the Faculty of Law of the prestigious Obafemi Awolowo University, Ile-Ife, and graduated in 2018. Almost immediately thereafter, she proceeded to the Nigerian Law School and was called to the bar in 2019. Usually many would expect MOJ, after spending not less than six years to become a lawyer with all the attendant academic, mental and physical rigour and huge financial involvement, to swing into active law or other related career. But nay! The fair-looking lady with notoriously perfect-pitch has her heart engulfed with music. She describes it thus,

“I am proud to be a Lawyer actually, and at the same time I feel I am very much on the right track doing music. Law and Music are like two roads leading to similar, if not same destination. I choose music because it is my passion or better described my way of life. While being a Lawyer is what I have been trained for.”

Asked if her study of law has some impact on her career in music: “Well, I am even more excited about my knowledge of Law which I think is helping me fit into many roles and make appropriate decisions.”

MOJ flows freely, or she is more comfortable doing Afro Pop and R&B music genres. Through these genres, she communicates feelings, ideas and values. She finds it difficult to state categorically what inspired her into music but she is sure that her thirst for it is unquenchable. According to her: “As long as it’s good music I would connect completely. Before I knew it, I began to grow in it and musical interest became refined into what it is today”.

Although her parents wanted her to become a lawyer, they seem not to be antagonistic to her music ideas. Her mother has always been supportive while her father was indifferent until recently. Now he believes more in her choice and both parents are proud of their daughter’s career choice.

MOJ who admits that she hardly get influenced by people or what they do believes that sheer creativity, originality of style and brand influence her, although has a good number of artistes home and abroad she admires and holds in high esteem based on how creative and exceptionally good they are at what they do.

Still not signed to any record label, MOJ has released hit songs such as OLULUFE, LET THEM KNOW, OLEKU, and her newly released track, ARA. She has loads of songs she is working on but currently her focus is on latest song, ARA. She also enjoins her fans to be expectant of DIFFERENCE, which she promised is going to drop soon.

The Ibadan born and Great Ife graduate believes that for the entertainment industry in Nigeria to compete favourably like that of advanced countries, the government has to put more effort to supporting the industry both in getting rid of piracy and in attracting foreigners to invest in it.

The upcoming artiste also enjoys dancing, and her goals are to make music videos with outstanding concepts and qualities, work with renowned artistes, writers and producers in Nigeria and beyond. To achieve this, she knows she has to work hard. So, her average days are usually filled with activities. She is either doing music or behind closed doors writing songs. She relaxes with watching movies or surfing the internet.

Having fervent belief that her music is going to be received by the whole world, she has developed the habit of paying close attention to responses, reactions, comments, feedbacks on her music, and so far, according to her, “they are have been positive and I’ve also made it a point of duty to give out nothing but the best”.

Delving into full time music in Nigeria is like other professions, they have their challenges, which include funding, promotion activities and finding a reliable platform to get your music across the globe. Despite all these, MOJ remains resolute and determined to pursue her passion.

Pushed to say something about young Nigerian talents yet to find their footing, MOJ opines:

“I will like to say to them that having talent is not always enough. They need to be convinced, to believe in themselves, to take the bold steps and be intentional about exploring it. That is when the world would see and believe in them.”

JERRY 'OBANS' OBANYERO is a Lawyer, Consultant, Content Creator and Writer. He writes articles and commentaries on law, politics, business, lifestyle and related issues. You can reach him on [email protected] or follow him on Twitter .